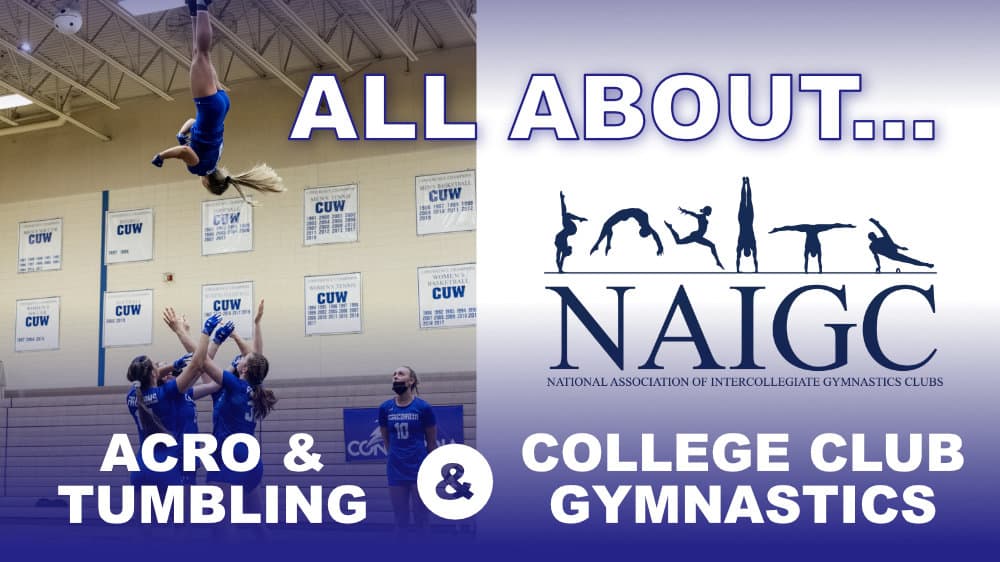 Competing on an NCAA gymnastics team isn’t the only way for college students to continue to participate in the sport. Acrobatics & Tumbling and college club gymnastics both provide students with other opportunities to use the skills they’ve worked so hard to develop.

What is Acrobatics & Tumbling?

First introduced at the collegiate level in 2009, Acrobatics & Tumbling is an exciting, fast-paced sport that combines gymnastics tumbling, acrobatic lifts, pyramid lifts, aerial tosses, and choreographed team routines. In 2020 Acro and Tumbling was announced as an emerging NCAA sport, and there are currently 50 NCAA programs ranging from division I-III. Most athletes come from a background in Development Program or Xcel gymnastics, trampoline and tumbling, or All-Star cheer. While the sport combines elements of gymnastics and cheer, there are no leotards, no pom poms, and no bows here. Instead, athletes compete in a form fitting, numbered jersey and shorts (similar to volleyball player’s uniforms), and wear tennis shoes for competition. Most coaches are seeking athletes with tumbling skills at an Xcel Platinum or Diamond level, or Development Program level 8 or above.

The meet format for Acro & Tumbling has two or three teams competing head-to-head in six different events held on a competition floor:

Meets usually take place in a basketball or volleyball arena with a competition floor placed over the hardwood, and typically last an hour and a half to two hours with a 15-minute halftime. As in gymnastics competitions, each heat is judged by officials following a pre-determined Code of Points. Team rosters are generally larger than a college gymnastics team, ranging in size from about 24-45 athletes. The sport continues to grow in popularity, with new collegiate programs being introduced each year, and Acro & Tumbling is expected to transition from an emerging sport to a fully sponsored NCAA sport in the coming years.

There are scholarship opportunities available in Acro & Tumbling, but, unlike NCAA gymnastics scholarships, these are equivalency scholarships, meaning a full scholarship may be split between students. Each program will have its own way of awarding scholarship money, so it’s best to contact the coaches about what is available.

What is College Club Gymnastics?

College club gymnastics proves that there really is a place for every level of gymnast to continue training and competing in college. Supported by the National Association of Intercollegiate Gymnastics Clubs (NAIGC), whose motto is, “For the Love of the Sport”, the organization is dedicated to providing a community for adult gymnasts (18+) at all skill levels. Currently, over 150 colleges and universities host club gymnastics teams. Club gymnastics is available in both Men’s and Women’s gymnastics, and many of the college clubs are co-ed. NAICG hosts local, regional, and national competitions throughout the season, and for many gymnasts qualifying for Nationals is a major goal.

While participants in college club gymnastics range from beginners to former Xcel Diamond and level 10 gymnasts, all have the opportunity to compete in a much more relaxed environment than NCAA teams offer. For gymnasts coming from a very serious and structured program, club gymnastics may come as a bit of a surprise. Known for its atmosphere of camaraderie and fun, many college clubs run practice in an open gym style where practices are drop-in and gymnasts aren’t required to attend a certain number of practices. Most college club teams don’t require tryouts and are known for welcoming those who are brand new to the sport and gymnasts who’ve competed at the highest levels.

Clubs vary in terms of coaching with some schools offering very hands-on coaching, and others that are mainly self-coached. If you’re considering joining a college club team it’s best to reach out to the teams at the schools you are interested in to find out more about how they structure practices and what type of coaching to expect.

Another great thing about the NAIGC program is that adult community teams are also permitted to compete in NAIGC meets, so even after graduating college athletes continue participating in the sport they love.

Each year NAIGC offers two $2000 scholarships to athletes graduating high school who plan to join a NAIGC club team, and the organization expects to expand the program in future years.

The good news for students interested in either Acro & Tumbling or college club gymnastics is that both programs continue to grow and offer athletes more opportunities to compete after high school is over.

Is Competitive Gymnastics Right for My Family?

Is it Time to Move On?

WHAT ARE YOUR QUESTIONS OR EXPERIENCES WITH EITHER ACRO & TUMBLING OR COLLEGE CLUB GYMNASTICS?​

My daughter competed Xcel Diamond two years and is now a second year L9 at 16 (her first go-around at L9 when she was 14 was disrupted by COVID. She decided about six weeks ago to explore the Acro & Tumbling recruiting world. Now just 6 weeks later and she's already been invited on an official visit to a D2 school. There are a lot of opportunities in A&T if it's something your daughter may have interest in. My daughter is now finally excited about exploring colleges, which makes this momma happy. She'd had a lot of fear of college searches because of academics and cost, and she's suddenly excited.

WHAT ARE YOUR QUESTIONS OR EXPERIENCES WITH EITHER ACRO & TUMBLING OR COLLEGE CLUB GYMNASTICS?​

I’m an A&T (NCATA) official as well, and the meets are very interesting and impressive. I am impressed with the strength and precision of these athletes, and at how hard they work. It’s a great path for retired or former gymnasts, and every year more colleges are adding it to their program.
if you have the chance to watch a meet near you, you should go.

How does one go about learning more about which schools offer A&T and club?

I’m guessing ideally I’m looking for something similar to mymeetscores that would help me see how big the teams are, how competitive they are, etc? And not that there is a “right” answer to either of those — more of a right fit for different athletes.

How does one go about learning more about which schools offer A&T and club?

I’m guessing ideally I’m looking for something similar to mymeetscores that would help me see how big the teams are, how competitive they are, etc? And not that there is a “right” answer to either of those — more of a right fit for different athletes.

here is a link of all the clubs . You can always create a club too!

And here's a link to the governing association for college A&T: https://thencata.org/

There are links to the schools, which seem to be added almost weekly! 50 D1, 2 and 3 schools have announced programs. Not all are currently active-- a few are going to have their first season starting in January 2023, and others in 2024. There are 30+ already competing.

How does a gymnast learn stunting if there are no gyms offering Acro & Tumbling in your area? Joining a cheer team?