What does everyone think of the new compulsory program? I'll add my opinion on it when I have a bit more time... overall... many positive points. The link to the program is below... 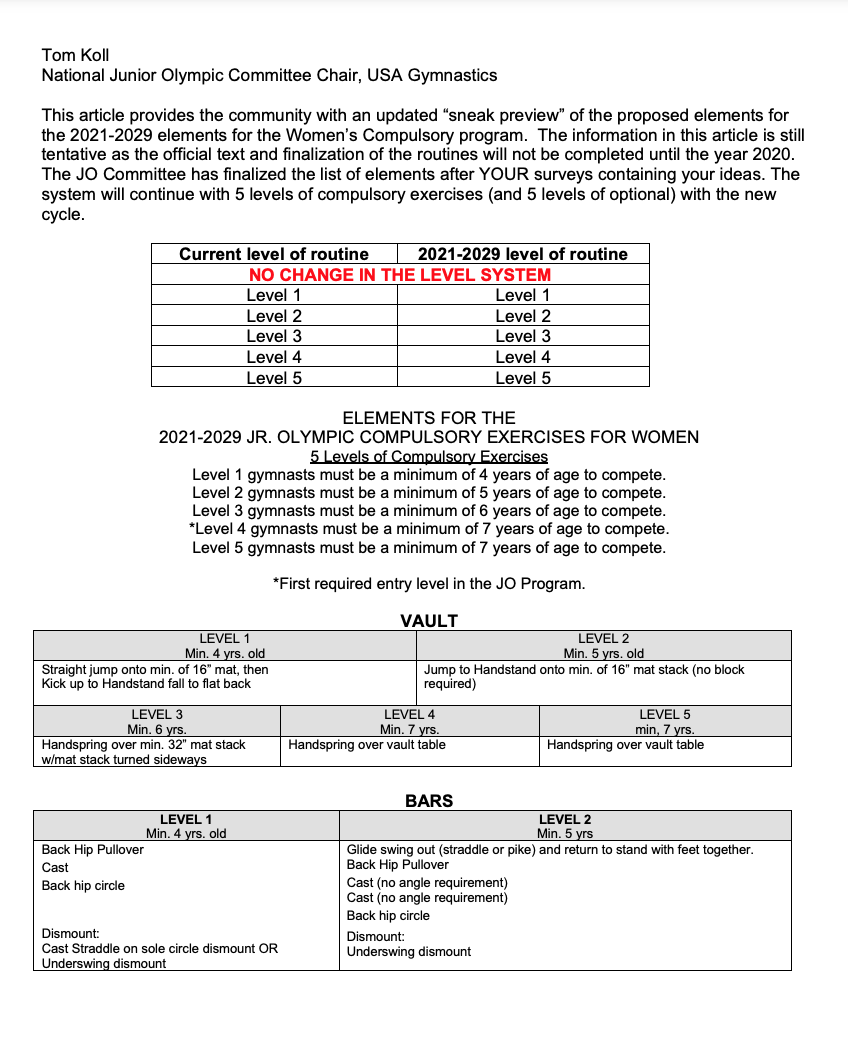 Pretty similar... what are the differences?
O

I think the new level 3 vault is nice to prepare for level 4/5. The new level 4 and 5 tumbling passes are, to say the least interesting. I love the new level 5 dismount, it is a necessary change.
Reactions: SMH
O

so...among a few other changes, did level 3 bars dismount change (from underswing dismount)? or was that already a change (the cast squat on stretch jump dismount)

I've started teaching the FHS step-out + Cartwheel + BER and I'm really struggling. Do we think the girls are going to squat out of the Cartwheel in to the BER?!? I do love all the new options for level 5 and love that there is a non-back tumbling option on beam.
F

Looks like the level 3 bars routine has changed a lot. How long have these new standards been out because a ton of the new level 3 routines were my DD2’s exact XS routines last season 2019-2020, especially vault and bars.

cogymmom2dd said:
Looks like the level 3 bars routine has changed a lot. How long have these new standards been out because a ton of the new level 3 routines were my DD2’s exact XS routines last season 2019-2020, especially vault and bars.
Click to expand...

I was also wondering how these new routines will intersect with Xcel. Will Xcel modify their routines as well?
C

PreciousJ said:
I was also wondering how these new routines will intersect with Xcel. Will Xcel modify their routines as well?
Click to expand...

I also wonder if they took some of the XCEL standards and ‘changed’ the JO standards but in reality they are exactly the same. Like copied and pasted from XCEL to JO equivalent.
When DD1 did XS, she vaulted onto the vault table and did a handstand flat back to stacked mats, this was 2016-2017. DD2 did XS last season and it had changed to the sideways stacked mat. I thought it was bizarre but it really helped her transition to the vault table this season.
Do XCEL and JO change in the same years? I know that the JO routines have been the same since DD1 was L2, that was 2015. The XCEL standards have changed sometime between 2017 and 2019 because I have had 2 kids go thru XS and at least the bar and vault routines changed. My DD2 competed the routine with the squat on stretch jump dismount. DD1 did not have that at all.
I also wonder if coaches had access to what the new routines would be and went ahead and made the XCEL routines exactly like what the new JO equivalent would be. However, the sideways mats were always the standard XS vault at meets for all teams so that has me thinking that they are literally copying and pasting from XCEL.
Reactions: PreciousJ

A lot of people believe they use Xcel as a "testing ground" for new compulsory ideas. This was super evident with Silver vault.
Reactions: cogymmom2dd and PreciousJ
C

Sk8ermaiden said:
A lot of people believe they use Xcel as a "testing ground" for new compulsory ideas. This was super evident with Silver vault.
Click to expand...

I believe this and I have witnessed these changes first hand.
However, my DD2 will still be considered a second rate ‘lesser than’ gymnast, as she has grown up on the XCEL path thus far. FWIW, she’s 9 and has been invited to up train with level 6’s once summer session starts, so I don’t think her path has been hindered at all by XCEL.
Reactions: jamieintexas

Most misunderstood part = Power hurdle or one step, Front handspring step out, Cartwheel step IN backward roll with straight arms to handstand

No more stride circle for Level 3? OMG that has been there since the 70s lol that's awesome....unless did they take that out before?
Reactions: jamieintexas, PinPin, 3cats and 1 other person
F

aerials said:
No more stride circle for Level 3? OMG that has been there since the 70s lol that's awesome....unless did they take that out before?
Click to expand...

Perfect that stride circle was awful and wasnt needed above level 3
Reactions: PeanutsMom and jamieintexas

Flopsygymnast said:
Perfect that stride circle was awful and wasnt needed above level 3
Click to expand...

Makes me glad my daughter is in Xcel, LOL. We've competed at meets with L3's and it is rare to see a good stride/mill circle. It seemed pretty universally hated.
Reactions: PinPin

What's funny about the stride circle is tiny little 2s and 3s are terrified of it and often take a year to learn it. If you take a kid who skipped 2 and 3 and therefore never learned one and ask them to try it for fun at level 5 or 6, they will get it in one try. That's why I never had kids who were optionals bound bother with L 2 & 3. It was a wasted year on bars.
Reactions: FlippinPrincess and jamieintexas
C

this one bothers me a bit because our girls are doing gold now with the plan to test out of 4 and 5 the same day. They all have lovely full turns on beam with their arms in front of them. We have level 9/10 girls at our gym who do their full turn with their arms at their sides. What do you all think is the reasoning for this one? Or had it always been this way and I never noticed? My older DD did a full season of 5 but I can’t recall how she did the turn.

For Parents proposed compulsory skills for 2021-2029

WAG Thoughts on these gymnastics "lullabies"?