For Parents Birthday party at the gym, HELP!

This is Ashley's first birthday of her school years, so I figured the gym would be ideal since she could invite her whole class. That's 20 kids, plus 5 from outside school. The only time available was 6:30, dinner time. Yes I'm freaking out.

Here's where things get sticky. My husbands work just got enacted a company paid for monthly allowance for children's activities, which is great. A few of them have expressed interest in gymnastics to my husband, who subsequently invited them to the party. I'm okay with that and everything, but that puts the total at 32-35 for JUST the kids. I have no clue how many parents will actually come!

I don't know what the best way to feed everyone is! I don't want pizza, because it would have to be delivered and they are notoriously late. Our party time is pretty strict so I don't want to deal with that. Anybody have any good ideas for food that doesn't cost an arm and a leg but is still good? There's not a whole lot of time for eating allotted, so I need something simple that's a step above pb&j lol!

Happy birthday Ashley!!! I would go with finger foods like chicken nuggets, mac and cheese, fruit salad (cut up apples, grapes, melon, strawberries, blueberries--easy stuff), veggies and dip. You may want to check with the local grocery store and see if they can do the mac and cheese and fruit salad for you. Also, if you have a Chick-Fil-A near you, they also do the nugget platters and stuff.

How about a crock pot full of hot dogs. Heat them before leaving the house, then fill the crock pot with water when you get to the gym and plug it in. Between that, carrot sticks, chips, and cake, the guests should be happy.

I wouldn't discount pizza, though. Perhaps a good friend could pick the pizzas up so that you're not at the mercy of a delivery guy.

I don't think you HAVE to serve a meal--6:30 is on the late end of supper time around here. If you let them know ahead of time that you'll have cake and ice cream (or whatever) they know to eat in advance. If you do serve food (hotdogs are a good choice, if you don't want to do pizza), let them know you'll have food, so they know not to eat.
L

Thanks for all the helpful suggestions! After work today I went into a local deli to get dinner, and by chance saw a sandwich platter pamphlet. I didn't know they did those, and I love that place! We're going to have ham and turkey croissant sandwiches, 2 fruit platters and 1 veggie platter. The produce platters are HUGE! For less than pizza for 60 people would have been, that's for sure!

I am now going to highjack my own thread. Ashley was allowed to start the girls rec classes this week since she'll be 7 on Saturday. I put my camera to work of course lol. She was so excited she could barely walk let alone get on bigger equipment! I think gymnastics appeals to the thrillseeker in her. She says stuff scares her a lot, yet she totally loves it. She doesn't go big for stuff in the gym like she does in ballet. As long as she's having fun and not being disruptive thats cool! Anyway, all these videos are all just 6-12 seconds long.

Her first time on a real springboard
YouTube - Ashley Vaulting

So after that I asked her to hit the board with 2 feet and try to hold her arms up when she jumps on the board. She took the arm advice to the max.
YouTube - Ashley Vault 2

What she calls her 'cool trick!'
YouTube - Ashley Bars

Off the preschool beams, FINALLY! She thinks she's totally ready for the high beam lol
YouTube - Ashley on the Low Beam

Since she loves the high beam and has never been allowed on it. I figured I'd make an exception for her birthday and let her sit on it since it will most likely be off limits at the party. She had 3 sting mats underneath her the whole time though! I thought that was very awesome of me. When I told her I was taking a picture for Nana and Poppa, she informed me that 'sitting is not a cool trick.' I took it anyway I think I uploaded the pics right to the album here, I was noobing with the albums for awhile!
C

What a little cutie! She looks pretty confident on that beam ;-).
L

cathiann said:
What a little cutie! She looks pretty confident on that beam ;-).
Click to expand...

Thanks She's having a lot of fun! She wants me to help her when she gets home on doing 'big kid cartwheels and handstands' but I have promised myself I won't do anything beyond stretching with her! She can demonstrate something, but I'm just going to smile and say good job! She never asked for actual help when she was in preschool classes, all the sudden she's hyper aware that I am a coach there. When I watch the beam video I'm like 'Dang! I shoulda kept my mouth shut!' on the parts where I asked her to get her arms up and look straight!
L

Everything worked out perfectly! The perishable food I was worried about went home with one of the younger coaches who's parents are going out of town for Spring break. yay no food thrown away or stinking up my fridge while we're gone!

The kids spent nearly 100% of their time swinging from the rope to the pit lol. Party pictures are mostly of the rope with a different kid on it! 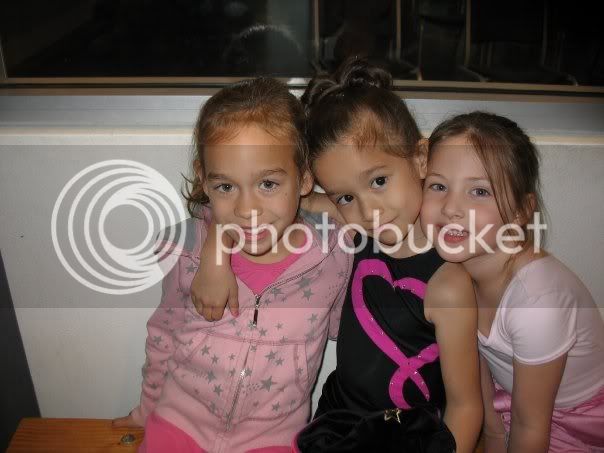 Richard got time to play with Abby... 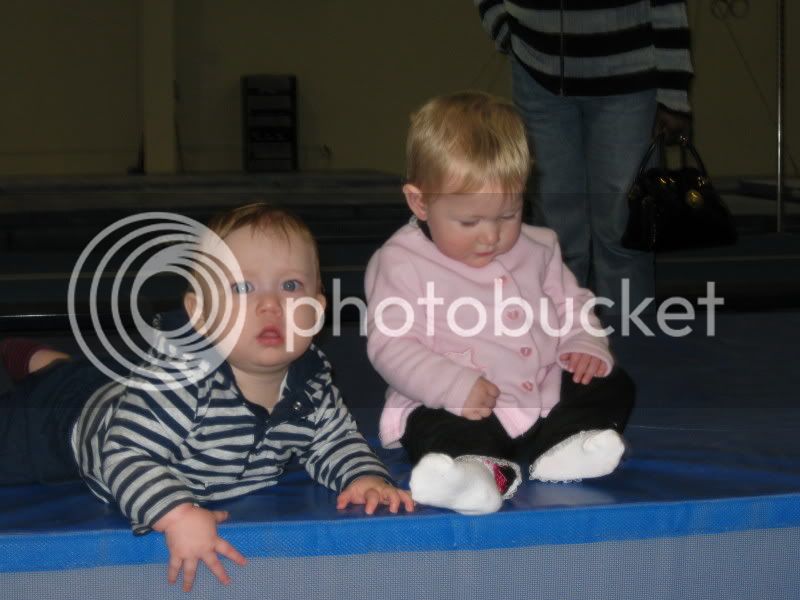 ...who ended up making him cry with a well placed smack to the face. Daddy to the rescue!

How did you get the ok to have 30+ kids come to a birthday party? We never allowed that many even with multiple coaches.

That was the cool thing about coaching birthday parties in my young 20's. Tips and leftover pizza, cake, and ice cream on saturday nights.
L

BlairBob said:
How did you get the ok to have 30+ kids come to a birthday party? We never allowed that many even with multiple coaches.

That was the cool thing about coaching birthday parties in my young 20's. Tips and leftover pizza, cake, and ice cream on saturday nights.
Click to expand...

Well, I don't know what the limit is to be honest! $230 covers the hour and a half, coaches, paper goods. All it says for beyond 20 kids is that they're $7 apiece. I know there are sleepovers too, but I'm not sure how it's staffed or what the kid/coach ratio is. We had a lot of flakes though, there were 19 kids there, I was actually relieved lol.

I loved the food at parties when I was younger too! My husband works on the weekend now, so no more pilfered party goods

For Parents Back in the gym again