Happy Chanukah, to anyone that celebrates it!!

Hanukkah is an eight day holiday starting on the 25th night of the Jewish month of Kislev. Hanukkah (The Hebrew word means 'Dedication') is also known as the Festival of Lights. The holiday goes back almost 2,400 years. Hanukkah celebrates one of the greatest miracles in Jewish history.
The origins of Hanukkah are an event that happened over two thousand years ago. At this time, Judea was ruled by Antiochus, a Syrian king. He attempted to assimilate the Jews into Greek culture, commanding them to worship Greek gods while oppressing Jewish culture and religion. A statue of Antiochus was erected in the Jewish temple and it was ordered that the Jews should bow down before him. 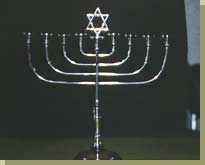 The Ten Commandments forbid Jews to worship statues or idols and so they refused. A small group of Jews called Maccabees (which probably comes from the Hebrew word meaning 'the Hammerer') rebelled, risking their lives to prevent the desecration of their Temple. Although the Maccabees won, the Temple in Jerusalem was destroyed. The Jews had to clean and repair the Temple, and when they were finished they rededicated it to God by rekindling the sacred Menorah (a six-stemmed candelabrum) of the temple. Only one small jar of sanctified oil was found, and yet the lamp stayed alight miraculously for eight days.
It is because of this miracle that Hanukkah is celebrated by lighting one candle on the Hanukiah (an eight-stemmed candelabrum) each day. 'Rock of Ages' ('Moaz Tzur' in Hebrew), a hymn of praise to God, is sung after each night's lighting of the candles. The Hanukiah symbolises how God looked after the Jewish people at this difficult time.

Thanks for explaining that! Happy Hannukah everyone!

For Parents Life after Team?

H
MAG Grips with rolls or not