Talk about the Championships here! The bracket is attached.​ 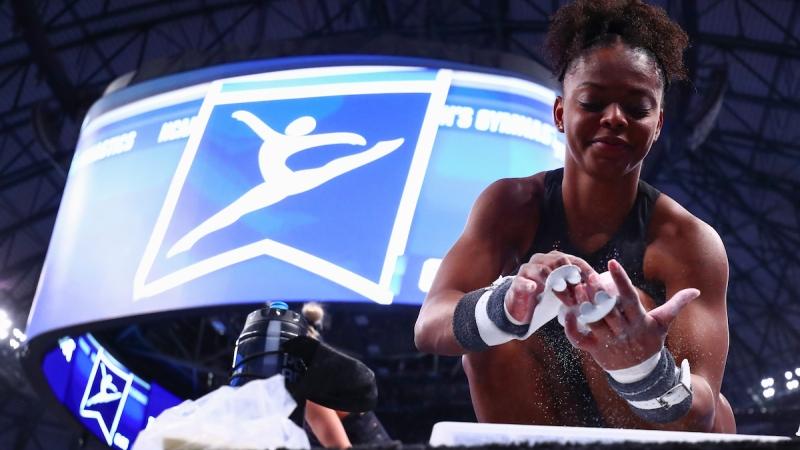 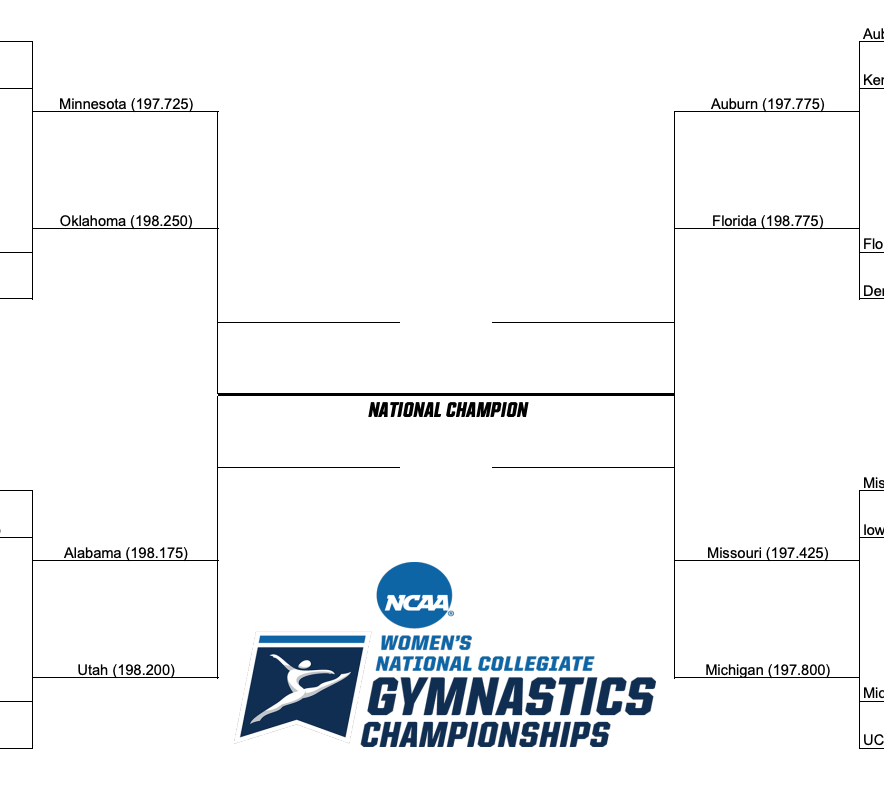 Gators all the way! Will they do it? History says no, until Rowland can prove otherwise. I would not be surprised to see Oklahoma, since they are always always locked in. I don't know what KJ does there, but she knows how to get them to perform with laser focus.

No personal preference, just looking forward to watching. I'm thinking Florida has the best chance but it is also theirs to lose, given what had happened in previous years. 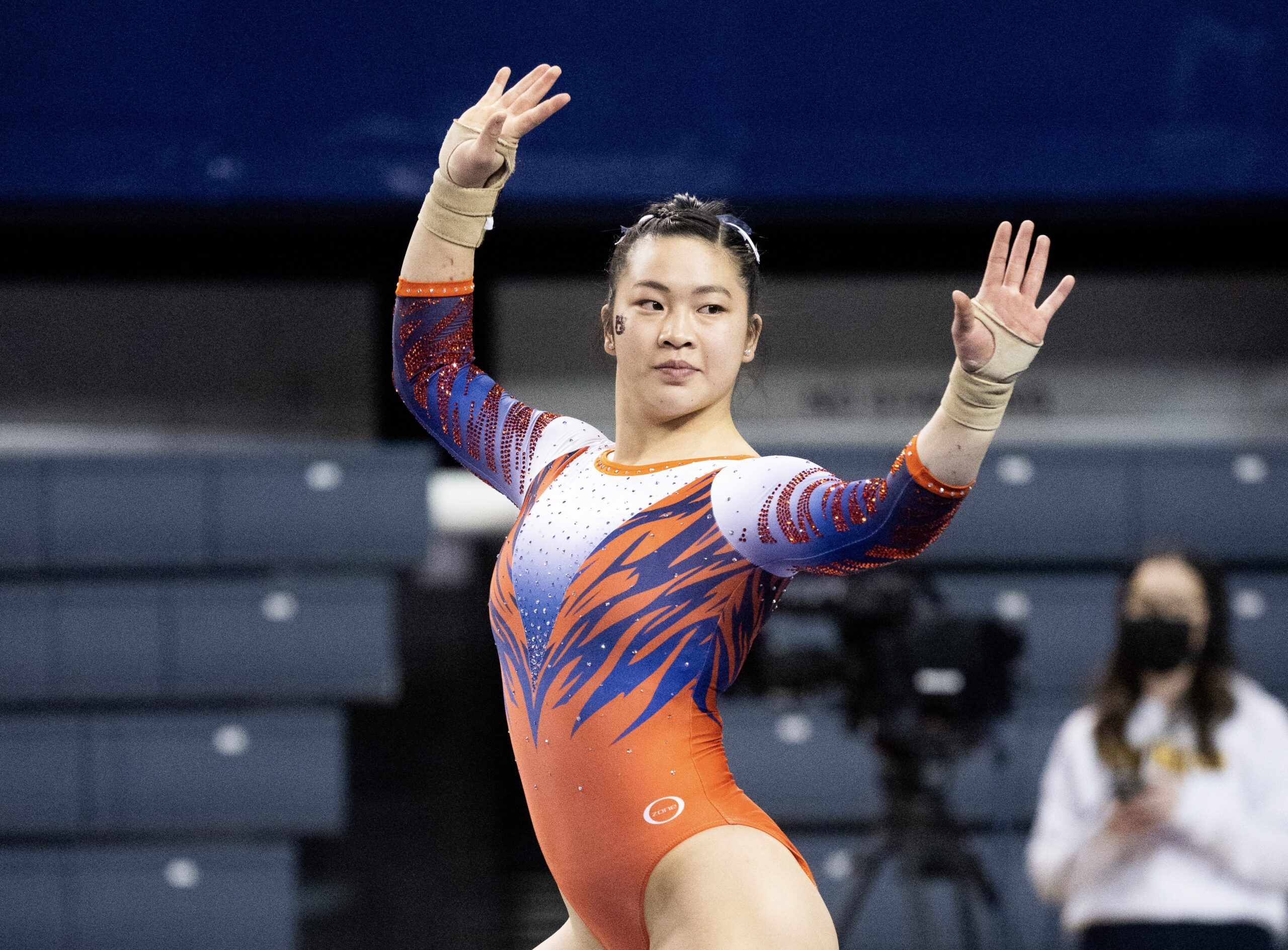 Inside Gymnastics caught up with Sophia Groth to discuss her transition to college, the electric Auburn crowd, her first NCAA regionals experience, and the focus for her team heading into the NCAA Championships.
www.insidegymnastics.com
Reactions: Lucia, GymAir, rlm's mom and 3 others

Inside Gymnastics caught up with Sophia Groth to discuss her transition to college, the electric Auburn crowd, her first NCAA regionals experience, and the focus for her team heading into the NCAA Championships.
www.insidegymnastics.com
Click to expand...

Its nice, she has had an incredible season and honestly Auburn would not be where they are now if she wasn't contributing at the level that she has this year. Otherwise, they would just be another Oregon State.

But darn, can we stop writing articles with these silly tropes to make it sound more than it is? What is this "the team has overcome so many obstacles....". "against all odds..." blah blah blah.
Reactions: Livelovegymnastics

I voted for The U (what us Minnesotans call Minnesota)!

Next for me would be the other Big 10 school. I think they've peaked though.

3rd is Auburn because I love underdogs.

4th for me is Florida. I think they can win and I love watching them.

Finally, Oklahoma is complicated. I went to UT so the fierce rivalry between Texas/OU is deeply engrained in me. BUT....I lived in Norman for a few years as a kid and my first gymnastics classes were taught by OU gymnasts (one of whom became a big name in the sport) so an OU win is good by me.

Is it just me or did anyone else have a problem with USAG's IG post? Highlighting just the big elites? It's like the all the other qualifiers don't exist.

Inside Gymnastics caught up with Sophia Groth to discuss her transition to college, the electric Auburn crowd, her first NCAA regionals experience, and the focus for her team heading into the NCAA Championships.
www.insidegymnastics.com
Click to expand...

Sophia is so articulate, I loved reading this!
L

I think Florida will come out on top. I would like to see a final four of Florida, Utah, Alabama and Auburn. However, I think it will be Florida, Oklahoma, Michigan and either Alabama or Utah (beam can make or break...). There are aspects of all the teams I love though, and some I'm more familiar with than others b/c of where I live, so will enjoy all of it no matter what. Looking forward to many of the individuals also. I always followed elite closely, but never followed NCAA until now. I'm having a blast!

gymgal said:
Is it just me or did anyone else have a problem with USAG's IG post? Highlighting just the big elites? It's like the all the other qualifiers don't exist.

Oklahoma was Oklahoma, that is the one thing with them, it has been a long time since I have seen them not deliver on a big stage. I was surprised at the Alabama collapse, not that they would have passed Utah, but that have also trended up in the previous post-seasons, with their best gymnastics coming at the end.

Florida almost was Florida, but seemed to find their groove in the last two rotations. Surprised, but not, not that we have benefit of hindsight, at the total collapse of Michigan. They just seemed like they were running out of juice at the end of the season after starting out soooo strong. I guess having a small bench really impacted them? Hats off to Auburn for staying consistent and not being overwhelmed with the stage.

I am not sure if you can extrapolate the semifinals to the finals. Just on numbers and recent performances, it really is just between Florida and Oklahoma. I don't think either one is clear above the other. Oklahoma was the better squad Thursday but that doesn't mean they will be on Saturday. Auburn and Utah will both be there if one or both struggle to take advantage, but all things being equal, they will have to root for Oklahoma and Florida to perform bad. Obviously, no one is going to win counting a fall.
Reactions: NutterButter

I didn't think there were any real surprises. Fun to watch!

I think college is doing a great job of promoting gymnastics in general.
Reactions: rlm's mom, Lucia, Mish and 2 others

I haven't had the chance to watch all of the replays yet but given the results, no major surprises for me in the semis. I still think Florida has the best shot but OU is right at their heels. I feel that Florida has more energy and something to prove, which could help or backfire...
Reactions: gym_dad32608

Wow… off to a crazy start! Who’s watching?
Reactions: Pirouette

DD18 and I are watching! Some amazing routines, and a few surprises!
Reactions: JBS

Great work college gymnastics... keep pushing the sport forward to the exact place that we want it... on prime time TV!
Reactions: Mish and Pirouette

Agreed on the 10.0. The scoring system is one of the main reasons why elite is so frustrating to watch for the average person.

As for the finals, I felt that OU and Utah were overscored on bars but felt OU was underscored on floor and VT so it's a wash. It really was a toss up between OU and Florida. A great final match-up.
L

My daughter and I just finished watching as I had family visiting. Utah's beam was sublime. Agree it was a toss up at the end between OU and Florida. I prefer Florida's gymnastics, but OU earned it. I'm sad the season is over.
Reactions: Mish
G

When an athlete lands with feet apart, then clap their feet together to salute, without moving forward or backward, without leaning (obvious that they didn't take a step to avoid falling), is that a deduction? and if it ism would it be a .05 or .1 deduction? The TV commentators call those a stick but I heard other people say they are not. Does anyone know the rule? There were a lot of those in the finals.

Florida vs. Alabama Today At 2PM On ABC!