For Parents What kind of PRACTICE BEAM?

We're looking at getting DD a practice beam for home.
Any advice on what kind to get?
I was looking at the one that folds up, but thought that it wasn't up very high??
I would appreciate any input! THANK YOU

I can't really advise since we don't have one. My daughter finds a scarf, stretched through the livingroom, works great! (we're in canada, we have a lot of scarves!)

I know there are a few parents on here who can chime in, some even built their own.

We're actually using a folded up towel But dd really wants a beam and her birthday is coming up!

For the longest time we used Painters tape on the floor in the kitchen. Then Beetle got a practice beam. We decided to go with the fold up one. Just because we live in an older house so we dont have the super high ceilings and not a lot of extra room.

She likes the beam, but wishes it was a little bit longer. She is now 13 and has really long legs. She cant do bhs bhs on it - she runs out of room!

We have one about 2 feet off the ground. I got it off Ebay for next to nothing. I just had to pick it up in DC. DD loves it. Some of her friends have had their families make them some that turned out nice. DH also built her one about 3 feet off the ground that is attached to our playground.

I know our coach supports the build your own. She said as long as it is close it works to get them practicing.

We bought one thru ebay at "Thebeamstore" a couple years ago. It is not a full sized one because we really have no room for it but it is about 5 ft long and enough to do a cartwheel on, handstands, or one backwalkover. It was very in-expensive & cheaper than if I did it myself.

I built one. Used two 6 ft 2x4s screwed together (could have used 4x4, but they didn't have any). I bought some industrial outdoor deck carpeting (you know, the stiff grey kind) and wrapped it around a few times for a bit of padding. Then I just added a couple of 12" 2x4's on each end to get it off the ground and stabilize it (they are perpendicular to the BB. DD really wants it higher and someday maybe I'll get around to it but I'm afraid of the stability.

IT's not pretty but it's functional. Actually, in hindsight I wish I would have made it 8 ft. I did it when she was 5 and not doing much but now she's practicing her cartwheels and while it's long enough, if she steps off toward the end she catches the wood stabilizers. When I finally raise the beam, I may add the extra 2 feet. No room for any more than that.

DH made one for our girls. He took an 8' 4x4, added "feet" from a 2x4, and covered it with carpet remnants. It's not very tall, but up enough that dd has to use her hands more than if it was flat on the floor.

It sits just behind the sofa and blends in as the carpet remnants are left over from carpeting the house.

He has plans to figure out a way to securely attach the two together to make a 16' beam but has yet to do it.

Made Nastias over a weekend about a year ago. At first we didnt cover it, but she didnt like how slippery it was, so I added some 1/8 dence foam padding, and covered with swede. She uses it all the time now.

Beam wood is laminated spruce (so it's lightweight), with mahogany supports. Beam cover is heavy duty ulpholstry swede ordered online for something like $3.50 a yard. 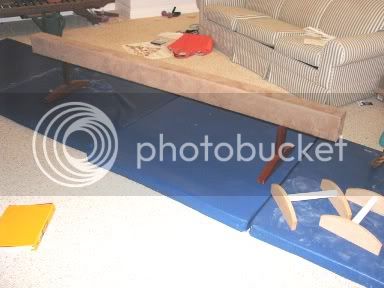 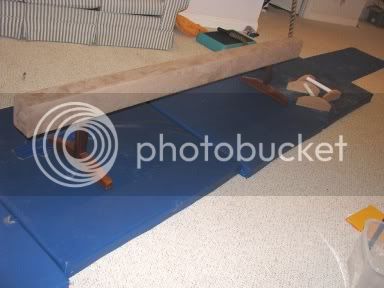 We have a fold up one. I like it because our basement is small. Since its on the ground there is less risk of getting hurt it is good for just practicing routines. Hearing from parents of older girls at the gym they stop using these when they get older plus they are at the gym more so I would not spend too much on one.

For Parents  buying folding balance beam for practice at home

F
For Parents  Good mat for home use?