ok everytime i do a cartwheel on the beam i can only get my right foot on the beam. and my left foot doesnt even touch it. why does this happen? what can i do to get it to go on the beam?plz help
B

There is another thread about beam cartwheels that you might want to check out. But for your specific problem, you may be "fanning" your leg around, rather than getting it vertical over your head. My DD does this sometimes, too. You need to make sure that your don't quit the cartwheel before the back leg finishes, if that makes sense.
M

Which leg are you starting your cartwheel on(ie which foot is in front when you start)? If it's your left leg (as I'm assuming it is), then there's a good chance that your legs aren't going overtop of your body and instead are going around the corner, if that makes sense. Make sure that you kick hard so that you can get fully vertical when you're up-sided down. Also, when your feet are starting to come down, make sure that you look at the beam under your arm so that you can see your feet land. Another suggestion, try to land only on your first foot and wait like a second before trying to put your second foot down.

I hope these suggestions help. Hang in there, I know it's frustrating.
E

How far from the beam is your foot? I may just be that you are not squaring your hips to the beam at the end of the move. This would be a possible cause if you are just missing the beam. If it is way off to the side I agree you are most likely fanning.

Stay focused and keep your legs tight as you step into your cartwheel. Try to push off the beam and project your legs over your head, not around your body. Don't give up!
L

I'd get off the beam entirely if I were you. Go back to doing cartwheels and landing with your feet on the line. Have someone watch you if possible to make sure your hips are square, arms come up with your chest/head, and that your feet aren't turned out or doing anything extreme after your done.

After you make 5-10 of those with no problem I'd do them with an 8 inch mat on the floor. Draw a line on the top of the mat with some chalk that's about beam width. If there's a line on the floor you can use, line it up with that one. If not, draw the line out on to the floor with chalk. Looks like this: 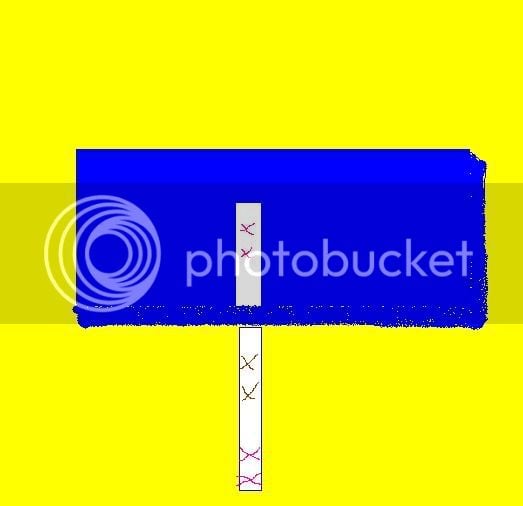 The mat being elevated forces you to kick hard over your head to get over, you can't fan and make this. It also compels you to push through the shoulders to stand up in your lunge at the end. Lots of gymnasts muscle their way up because they have great balance...because they can! Can't do that here, the difference in height makes it near impossible and at the very least not worth the effort to try. Easier to push through the shoulders, and since we all like easy the push will happen. One other thing, some gymnasts like to bring one hand up first and try to push through on one shoulder; can't do that here! One handed attempts stop after the first try after figuring out it makes them fall forward lol.

After you can make them (they aren't hard, but they really do force you to kick over and push you'll be surprised lol!) start paying attention to if your feet are finishing on the line. If they are not, check your hand and foot placement in the beginning of the cartwheel. The culprit is usually hands not being placed on the line.

If they are but you can't stick it, then figuring out why is a process of elimination. Either your arms are not coming up with your head, or your hips are not square. Usually this is from the push through the shoulders being focused on, and in some cases overdone, just to make it to the top. Bringing the arms up with the head gets the push through the shoulders under control. Just asking the gymnast to bring her arms up at the right time will typically square the hips also. Easier prevails again! If they are coming up with the gymnast, they are usually even and not dragging the hips out of alignment.

After you can stick 5 of these I'd move to the beam and try some there. I'm a stickler for arms coming up. If I see one on the beam that finishes with arms down I send them back to the mat for 2 before they do another on the beam again.

Oh Linsul I just love your diagrams, they make it so much fun.
L

bogwoppit said:
Oh Linsul I just love your diagrams, they make it so much fun.
Click to expand...

lol ty! Normally I giggle at myself like an idiot as I bumble through paint. I had the added bonus of Ashley next to to me this time. She loves paint, she's pretty pro at it. So she's sitting here squinting at my terrible x's and not saying anything. When I was finished I said 'TA-DA!' and she says 'ohhhh...oh my gosh...wow.' In her most bored voice. So of course I chased her upstairs and tickled the sarcasm out of her! After my five second victory she says 'Respect the 8 incher!' all mock serious. She's gonna be trouble as a teenager, her grasp of sarcasm at 6 is shocking! It's momentary right now at least. currently she's back to normal and telling me aout flowers having nectar for bees to get. Kids!!

Love the diagram, Linsul! And Ashley sounds like a handfull! LOL
G

You need to make sure you are going straight over the beam. My little sister has this problem too. She goes around the side of the beam and her cartwheel is really slow, so maybe you should go faster. When i was learning it, it was just that i was afriad to get my second foot on, but i got over that soon. My sister hamstrings are also really tight, so she isn't flexible enough to get her second foot on and she can't do a squat on either because of this. Just practice on a line on the floor and practice going straight over the beam or the "line". Then gradually get comfortable moving up the beams. Good luck!!
K

Linsul, I like your drill. I've taught lots of cartwheels on beam and used lots of techniques for doing it, but this is the first time that I've seen this idea. I'll be using it the next chance that I get!
K

One reason many gymnasts kick their legs around instead of up is because they drop their arms going into the cartwheel. In linsul's illustration, notice how stretched the cartwheel is. If you reach down, instead of out, you will kick your legs around every time. We use carpet squares to help with this -- lunge over the first (would go in between pink X's, hands over the second (carpet goes between the pink & brown X's), first foot down over the third (carpet between the brown * pink X's), and second foot down - to land in a lunge- over the fourth (between the second set of brown X's). We also have vinyl squares that we use for this, but for more advanced gymnasts, I like the carpet squares better. They slip if you step on them, so if you don't want to fall, then you'll reach over them! Of course, we only do this on the floor and low beam -- not on high.
L

Thanks lol, and yeah when Ashley is having a high angst or sarcasm moment she can be a handful! I have to remind myself of the age I'm dealing with when her commentary turns snarky!


KAQuinlan said:
Linsul, I like your drill. I've taught lots of cartwheels on beam and used lots of techniques for doing it, but this is the first time that I've seen this idea. I'll be using it the next chance that I get!
Click to expand...

Thanks! It's a good one, a go-to in my arsenal. I really like it because it makes the correct way also the easiest way. Even if they 'want' to do the cartwheel funny, they very quickly learn it's a waste of time. Nothing 'coaches' like convenience in my experience lol! It also really teaches them the feel of doing it 'right' vs. 'wrong.' After the exaggerated feel of 8 inch ones, if they mess up a ch on beam they usually know where things went wrong and what to fix.

You might want to spot the first 1 or 2 that they do. Just in case they fall forward, which they often do the first couple of tries. I spot with one hand at the hip of the lead leg to push them back if they're leaning forward as they finish. My other hand is free to raise their arms as I push them back (if needed).

This drill is not hard, but it does get underestimated at first usually. It does provide some comic relief to the girls their first few tries!

**Edit** Good call on bringing up the need to stretch out a ch. If gymnasts are around the same height, I'll draw a line with chalk that I want their hands to be past. If not, I just watch. If they're doing this drill they have an excellent ch on floor, so sometimes I'll chalk their hands and mark where their feet were to start just on the floor. That way they can see how far they reach, and (hopefully) know not to shorten it because a mat or a beam is involved. It's worked so far!
Last edited: Jul 17, 2009