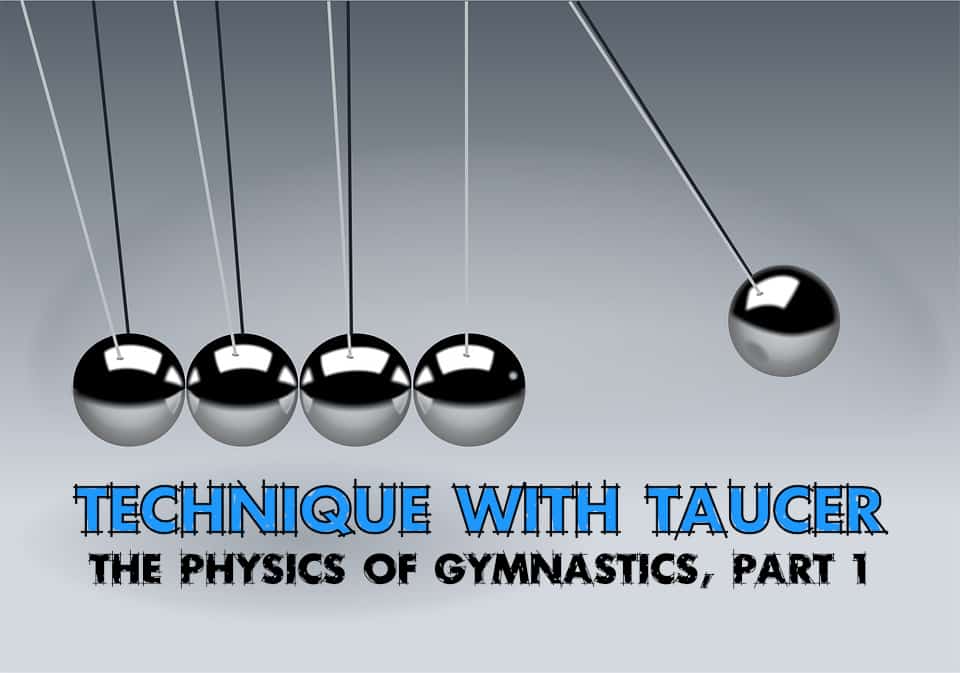 I’d love to see one or more columns on the physics of various gymnastics skills, especially on bars. I took up a different flying-through-the-air sport as a young adult and was always fascinated by the conversion of linear motion into rotational motion.

Before I start, let me just thank mommyof1 for handing me this blank check to nerd out about one of my favorite topics. This will be a multi-part series, and I probably won’t get to bars until part two or three at the least. I will also include some simple physics experiments you can safely do at home to demonstrate some of the principles we use in gymnastics, and if you are the parent or guardian of an athlete, I highly recommend inviting your athlete to join you for these experiments.

Anyway, let’s get to it.

In this month’s column, we’ll look at a few physics concepts that form the necessary basis needed to understand the principles at work in gymnastics. These concepts are center of mass, linear momentum, and angular momentum. We’ll also look at some simple experiments you can do at home to demonstrate these concepts.

The first physics concept that we must understand is center of mass (CoM for short). Everything else we’ll be discussing in this series revolves around the CoM, both literally and metaphorically.

The CoM is the average location of the gymnast’s mass. While the athlete is airborne, the CoM will follow a parabolic path which is irrevocably determined when the gymnast becomes airborne. The center of mass also acts as the central point around which all rotation occurs.

To illustrate this concept, there is an easy set of experiments you can perform (preferably outside). For this experiment, you will need a stick or rod (ideally somewhere near two to three feet long), a plunger, and some tape.

Put a small piece of tape around one end of the rod, and another piece of tape around the center of the rod. Hold the rod out in front of you, throw it up in the air, and spin it as you throw it. First, watch the tape on the end. You’ll notice it follows a complex path, circling but also rising and falling as the rod goes up, reaches its peak, and then begins to fall. It would be very difficult to predict ahead of time exactly what path the end of the rod will take as it flies through the air.

Now throw it again the same way, but this time watch the center of the rod. As the rod rises and falls, regardless of its rotation, that center point will follow a very simple, easily-predictable path. If you throw the rod straight up, that center point will go straight up and down; if you throw it with some horizontal movement, it will follow a parabolic path that curves towards the ground.

That center point is the CoM.

Now, grab the plunger, and once again spit it up in the air. Because there is a dramatic imbalance in the weight distribution, the center of mass will not be at the midpoint of the handle; rather, it will be very close to the head of the plunger. The handle will rotate around the head, because that is where the CoM is. Once again, the CoM will act as the center of rotation, and will trace a very simple and predictable path through the air.

For gymnastics purposes, the CoM is approximately in the athlete’s waist. Its exact location varies depending on body position—in some circumstances it can even be outside the athlete’s body—but if we generally assume the waist to be the center of mass, that will be close enough for our purposes.

From here, we’ll move on to discussing force and momentum, which comes in two forms: linear and angular.

Linear momentum is what happens when force is applied through an object’s CoM. In a zero-gravity environment, any linear momentum that an object has would cause its CoM to move indefinitely in a straight line. In an environment with gravity, this path will curve downward.* Once the athlete is airborne, the parabolic path of their CoM is set in stone; there is nothing they can possibly do to change how high or how far they’ll go before landing, unless they come in contact with some external object (a bar, a vault table, a spotter, etc).**

To illustrate these two concepts, we can perform a simple experiment using a swivelling wheeled office chair. Make sure you have a bit of room around the chair (and a hardwood floor will make this work better).

Stand or sit in front of the chair, put your hand on the front of the seat, right between where your knees would be if you were sitting, and push directly forward towards the center of the seat. The chair will roll backwards and, assuming all of the wheels are rolling cleanly, it will travel in a straight line with little or no rotation. By pushing through the chair’s CoM, you have created linear momentum, causing the chair to move backwards in a straight line.

Now, put your hand in the same spot, but this time instead of pushing directly forward towards the center of the seat, push to one side. The chair will not travel much, but will spin in place. By pushing in a direction which is tangential to the CoM, you have created angular momentum, causing the chair to spin.

The laws of physics are not just useful; they’re beautiful beyond description. Each and every gymnastics skill is a delicate dance. Like any dance, it requires trust, respect, and confidence

*Technically, the CoM is following a straight path through curved spacetime, but general relativity is well beyond anything we need to know in order to understand gymnastics, so (much to my disappointment) we won’t delve into it here.
**We’re ignoring the effects of air resistance because their effects are negligible in the context of gymnastics. We’re also assuming the athlete is not wearing a jetpack.

***The net amount of angular momentum and its direction cannot be changed while airborne, but the athlete can make adjustments to how efficiently they use that momentum, thus changing the speed at which she rotates. We’ll delve into this more in part two.

You have Successfully Subscribed!

Physics is so important to good coaching!

I eagerly await the next installmen!

Awesome... looks like we have some physics freaks out there. If you have questions about the physics of gymnastics... ask them now in this thread!

You are completely correct -- I suppose I was leaving the reader to infer from context that I was referring to what happens while the athlete is airborne, but I didn't specify it.

But then, pretty much anything we could say about classical mechanics as applied to gymnastics would properly have such a long list of clarifications and caveats that if I mentioned them all, the resulting article would be as long as a college physics textbook, so I try to keep the explanations contextually relevant and reasonably succinct and accessible, even if it means omitting some nuance.

For example my next article will discuss conservation of momentum, and how once an athlete is off the ground*, their momentum is conserved**, and they cannot*** change it****.

*Actually, we're assuming that the athlete does not come in contact with a spotter, a piece of equipment, a spotting belt, or an extremely strong gust of wind, all of which could alter their momentum

**Actually, they are constantly losing momentum to air friction, but the effect is negligible in the context of gymnastics

***Actually, the athlete could could alter her momentum by means of expelling some manner of propellant which would push her in the opposite direction, such as if she was wearing rocket boots, or carrying a very powerful motorized fan*****

****Actually, there is a slight tidal effect caused by the fact that not all of her body is exactly the same distance from the Earth, but the effect is negligible in the context of gymnastics******

*****Actually, she could also expel a lungful of air, or she could fart, and the same principle would apply, but the effect would be negligible in the context of gymnastics

******Actually, the way this effects her rotation might change depending on which direction she's rotating relative to the axis of the earth's rotation, the solar system's rotation, and the galactic plane, but these effects would be many orders of magnitude smaller even than the other effects we've already dismissed as negligible*******

*******Actually, all of this is probabilistic rather than deterministic due to the principles of quantum uncertainty, but the odds of simultaneous occurrence of a sufficient number of quantum anomalies to be noticed are so low that on average you'd have to do gymnastics for considerably longer than the expected lifespan of the universe before you'd actually see it happen********

********Actually, while I'm reasonably confident in my grasp of classical mechanics, my understanding of relativity theory is informal, my understanding of quantum mechanics could very generously be described as surface-level, and my grasp of anything beyond that is nonexistent, so we're well past the point where I actually have any clue what I'm talking about, but I suspect an expert physicist could continue even further down this rabbit hole********* Impressed with what happened at the Olympics

irritated with USAG and Simone crew

The "Skill Bucket" Theory... Did Simone Fill Up Her Bucket?