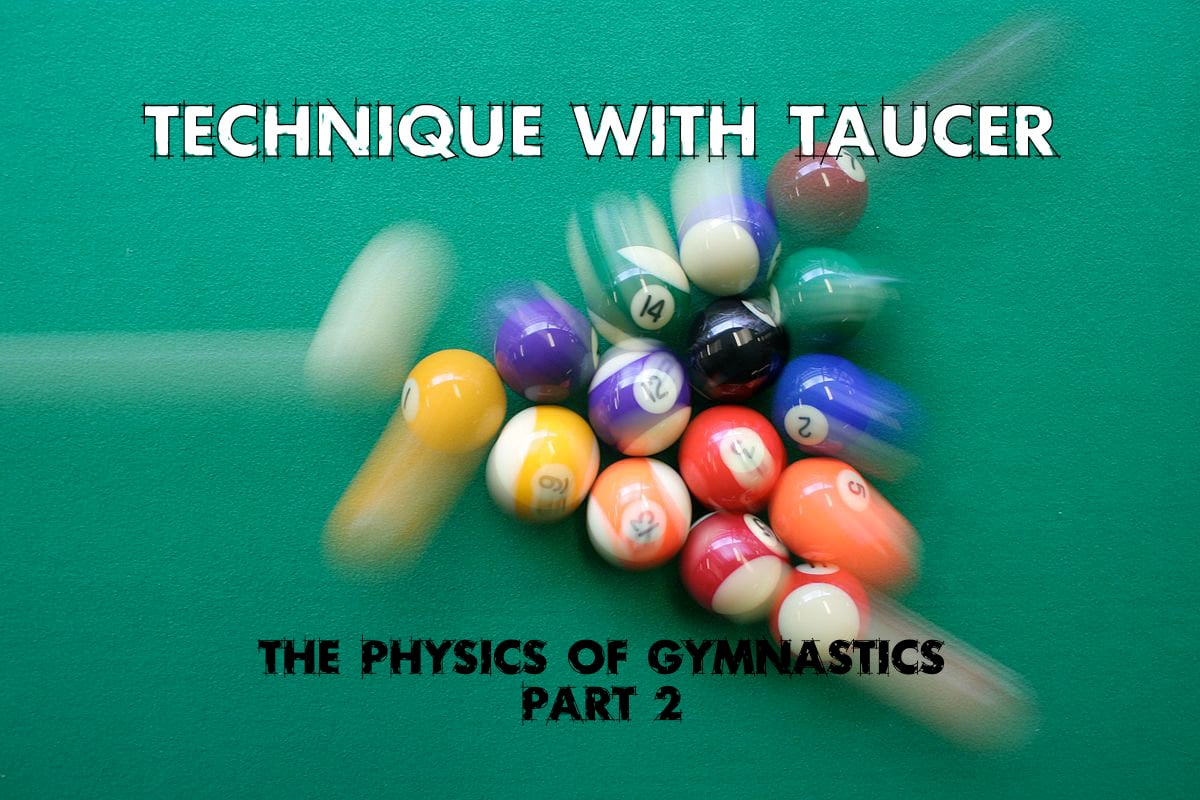 In my previous column, I discussed an athlete’s center of mass (CoM), and the two types of momentum the athlete has: linear (associated with motion in a direction) and angular (associated with rotation). To quickly recap our last column: the athlete’s center of mass (CoM) is the average location of her mass. A force applied through her CoM will cause her to move in the direction of the force, which means she has linear momentum. A force applied in a direction that does not go through her CoM will cause her to rotate, which means she has angular momentum. So how can we use these concepts to better understand gymnastics skills?

Quick disclaimer: I am discussing physics concepts specifically in the context of gymnastics. Given this context, I’ll be oversimplifying a few things and omitting nuances when their effect in gymnastics is negligible. These omissions are marked with a single asterisk(*).

For every action, there is an equal but opposite reaction. One of the most important implications of this law is that while an athlete is airborne, it is physically impossible for her to alter her net linear or angular momentum.* This means that her height, distance, and speed cannot be altered while airborne.*

Rotation is a bit more complicated. While the gymnast’s total rotating power is constant,* she can alter how efficiently she uses this momentum, thus altering the speed of rotation.

We’ll start with conservation of linear momentum, and we’ll do so by means of a thought experiment. Imagine an astronaut gymnast (let’s call her Belinda) out in space. She’s floating in place, and her center of mass is not moving.*

In this situation, there is nothing Belinda can do to cause her center of mass to move. She can change the position of her body, but no matter what she does, the location* of her center of mass will not change. She might move any individual part of her body, but whichever way she moves it, the rest of her body will move in the opposite direction just enough to keep her CoM motionless. If moves one part of her body up, the equal but opposite reaction will push the rest of her body down, such that her CoM stays in exactly the same place. This is what it means to say that linear momentum is conserved; if her angular momentum starts at zero, it will remain at zero.

In order for Belinda’s CoM to move, we’ll have to add something to our scenario: imagine she has a large rock. If she pushes the rock, it will move away from her in a straight line; however the equal but opposite reaction will push her in the opposite direction. Belinda might think she’s pushing the rock away form herself, or she might think she’s pushing herself away from the rock; functionally, there’s no difference between the two.

If there are no other forces or objects to interact with, Belinda and the rock will continue moving away from each other in a straight line at a constant speed forever. There is nothing Belinda can possibly do to alter her velocity or its direction.*

In order for Belinda’s speed or direction to change, there will have to be some sort of force applied through her center of mass. So we’ll finish up this thought experiment by adding one more thing to our thought experiment: the force of gravity.*

Rather than floating in space, we’ll imagine Belinda to be standing on the surface of a planet. Imagine she jumps – that is, she uses her feet to push the planet downward, and the equal but opposite reaction sends her upward. From the moment her feet break contact with the ground, there is nothing Belinda can do to change the height she’ll reach, or the amount of time it will take for her to come down. This remains true regardless of whether she jumps straight up, or jumps forward/backward/sidward.* The instant she becomes airborne, both her flight path and her flight time are set in stone, and cannot be altered unless she interacts with an outside force or object.

This use of equal-but-opposite reactions is how we move around in every day life. When you take a step backward, you push the floor forward. When your car moves forward, it pushes the road backward. When you toss a ball up in the air, that toss also pushes you downward against the floor.

This principle is what allows cats to always land on their feet when they fall. By gyrating the lower body in one direction, their upper body to rotates the opposite direction until they are in a position to safely land.

Unlike linear momentum, athletes can change how efficiently they use their angular momentum while airborne, and in doing so exert a level of control over the speed of their rotation.

To explain this, we’ll introduce a new concept: rotational radius. An athlete’s radius is the average distance between her mass and her axis of rotation. The larger the radius, the greater the circumference. The greater the circumference of each rotation, the fewer rotations can be completed in a given amount of time with a given amount of angular momentum.

This is why a tuck flips faster than a layout; by pulling into a tuck, an athlete can decrease her rotational radius, which causes her to make more efficient use of her angular momentum and flip faster. Conversely, she can extend towards a layout position and/or bring her arms up to increase her radius, causing her to rotate more slowly.

Generally, optimum technique for a tucked or piked salto is for the athlete to take off with the body stretched out for maximum radius (known as the “set”). She then pulls into her rotating position; by shrinking her radius, she accelerates her rotation. When the rotation is complete, she extends back out of her tuck position to slow her rotation in preparation for landing. Throughout this entire process, her angular momentum remains constant; she is only changing how efficiently she uses that momentum.

An athlete performing a skill does not have time to think about these mechanical principles or how to apply them. In fact, it is not at all necessary for an athlete to have a theoretical understanding of these principles that they can put into words. Through practice and drills, athletes learn these principles by feel and reflex, even if they can’t put the specifics into words. Developing a ‘gut feeling’ for the mechanics is more important than developing a formal understanding of the underlying theory.

However, I believe that as athletes get older and more mature, a general understanding of the underlying theory can help them make better corrections and adjustments to their own technique. Understanding of theory can also help coaches devise more effective drills and progressions.

But just as importantly, an ever-improving understanding of the underlying mechanics makes the sport of gymnastics ever more beautiful.

**There are some complications here involved in twisting. While net angular momentum stays constant during a flip, that momentum can be “borrowed” while airborne to cause the gymnast to twist – and it is even possible to change twisting direction while airborne. However, the net angular momentum remains constant as does its direction. I may get into this more in a later column.

You have Successfully Subscribed!

Physics is so important to good coaching!

I eagerly await the next installmen!

Awesome... looks like we have some physics freaks out there. If you have questions about the physics of gymnastics... ask them now in this thread!

You are completely correct -- I suppose I was leaving the reader to infer from context that I was referring to what happens while the athlete is airborne, but I didn't specify it.

But then, pretty much anything we could say about classical mechanics as applied to gymnastics would properly have such a long list of clarifications and caveats that if I mentioned them all, the resulting article would be as long as a college physics textbook, so I try to keep the explanations contextually relevant and reasonably succinct and accessible, even if it means omitting some nuance.

For example my next article will discuss conservation of momentum, and how once an athlete is off the ground*, their momentum is conserved**, and they cannot*** change it****.

*Actually, we're assuming that the athlete does not come in contact with a spotter, a piece of equipment, a spotting belt, or an extremely strong gust of wind, all of which could alter their momentum

**Actually, they are constantly losing momentum to air friction, but the effect is negligible in the context of gymnastics

***Actually, the athlete could could alter her momentum by means of expelling some manner of propellant which would push her in the opposite direction, such as if she was wearing rocket boots, or carrying a very powerful motorized fan*****

****Actually, there is a slight tidal effect caused by the fact that not all of her body is exactly the same distance from the Earth, but the effect is negligible in the context of gymnastics******

*****Actually, she could also expel a lungful of air, or she could fart, and the same principle would apply, but the effect would be negligible in the context of gymnastics

******Actually, the way this effects her rotation might change depending on which direction she's rotating relative to the axis of the earth's rotation, the solar system's rotation, and the galactic plane, but these effects would be many orders of magnitude smaller even than the other effects we've already dismissed as negligible*******

*******Actually, all of this is probabilistic rather than deterministic due to the principles of quantum uncertainty, but the odds of simultaneous occurrence of a sufficient number of quantum anomalies to be noticed are so low that on average you'd have to do gymnastics for considerably longer than the expected lifespan of the universe before you'd actually see it happen********

********Actually, while I'm reasonably confident in my grasp of classical mechanics, my understanding of relativity theory is informal, my understanding of quantum mechanics could very generously be described as surface-level, and my grasp of anything beyond that is nonexistent, so we're well past the point where I actually have any clue what I'm talking about, but I suspect an expert physicist could continue even further down this rabbit hole*********

Great start! Looking forward to the next installment

Here is the second installment from our own @Geoffrey Taucer

The Physics of Gymnastics (Part 2) | Conservation of Momentum

Understanding linear and angular momentum and how they apply to gymnastics skills.

starting to think about university

The Physics of Gymnastics

What sport did you gymnast do in HS if there isn't a gymnastics team?