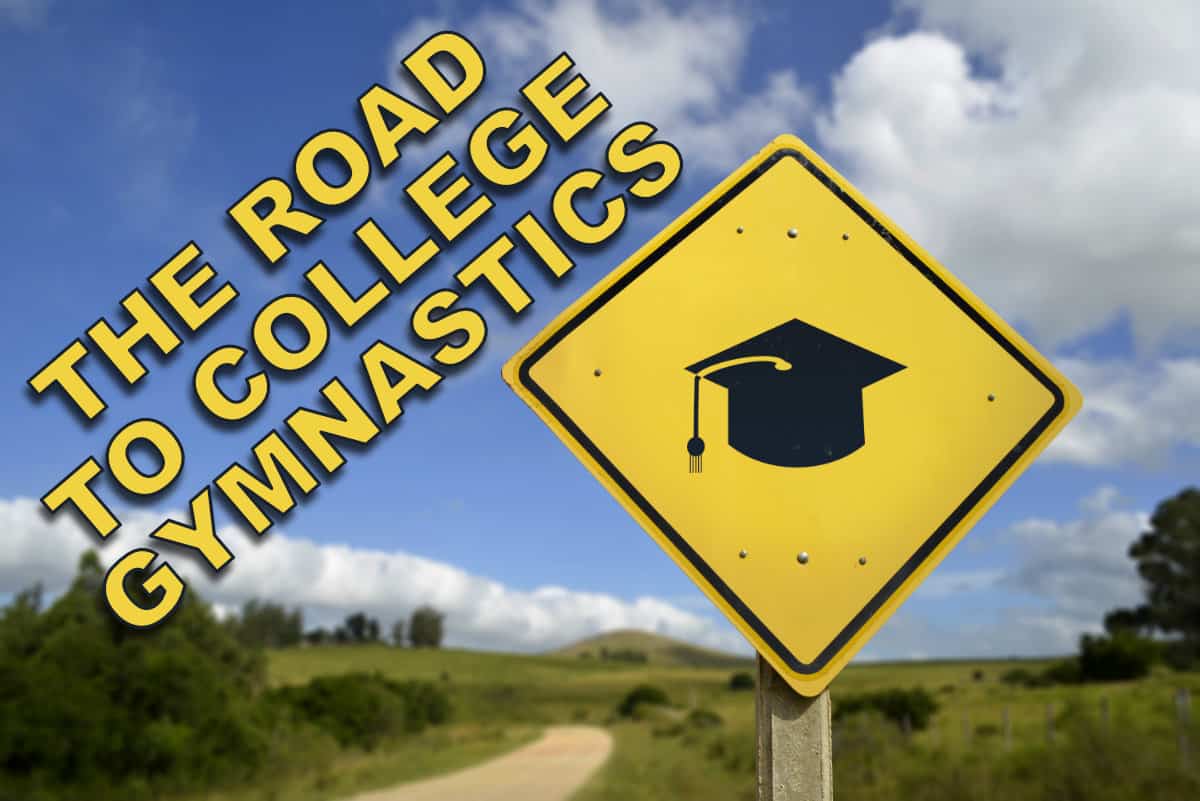 If competing on a college gymnastics team is a goal for your child, you probably have a lot of questions about how to get there. With advice from some of the top collegiate gymnastics recruiting experts, we’ve got the inside scoop on how your gymnast can turn their dream into reality.

How competitive is it to join a college team?

In a word: very. Currently there are 82 NCAA college gymnastics teams (divisions I-III), but only 62 of those are division I programs with full athletic scholarships available. Division I schools have 12 head count scholarships, but these are divided up across the student athletes’ four (and in some cases, five) years of college, meaning a school may have only three or four scholarship spots to offer per year. Division II schools can offer full or partial scholarships, while Division III schools do not offer scholarships. So, with a limited number of team spots available, just making it to upper level Optionals isn’t enough—unless they are competing at the Elite level, most gymnasts need to work to get onto the college coaches’ radar.

“Now you see college gymnastics on TV, so more kids are aware that competing in college is an option, and at the same time the level of gymnastics has increased. This is great for the sport, but there are only so many spots available on a team.”

When should you begin?

The recruiters we spoke with agree that for girls the process of working toward recruitment should begin in 9th grade or level 10, whichever comes first. Wendy Campbell notes that the process for boys usually begins later.

“Boys are on a different trajectory because there is still so much physical growth even late into high school,” says Campbell. “Junior year is when boys typically begin the recruiting process, and they don’t get offers until their Senior year.”

NCAA rules do not allow contact between gymnasts and college coaches until after June 15th of their sophomore year of high school. This includes any contact through phone calls, text, direct messages, and emails. After August 1st of their junior year of high school gymnasts may begin making official college visits. But even before official contact is allowed, gymnasts can begin researching the programs they are interested in, developing the skills college coaches are looking for, building their gymnastics social media presence, and focusing earning the grades they’ll need to get onto a college team.

Understanding how the recruiting process works is the first step. Jill Hicks, former NCAA division I gymnast and owner of JH Consulting, shares that many gymnasts send an email to every college coach in hopes of getting attention but warns that this is the wrong approach.

“Coaches take less than two minutes to review an athlete, and often they just delete the email,” says Hicks.

Instead, she recommends a much more targeted approach.

“We start with education and research and have a five-step plan to help gymnasts find the right fit,” Hicks says. “We teach the families what the coaches are looking for, and we’re here to tell you the truth and match the gymnast to the right schools.”

As exciting as being part of a college gymnastics team is, athletes should keep in mind that they want to find the right all-around fit.

“It should be a three-prong approach,” says Campbell. “You want to find the right fit academically, athletically, and socially. I always ask recruits, ‘Would you want to be at this school if you weren’t doing gymnastics?’ Making sure the school is the right academic fit is the first priority.”

What are college coaches looking for?

Posting videos of a big, flashy skill done into the pit, or a difficult skill that isn’t well executed are not what college coaches are looking for.

While college coaches are always looking for great all-around gymnasts, the recruiting consultants all agree that at the moment strong vaulters are the most sought after.

“Right now, vault is the highest scoring event in college gymnastics,” says Gebeshian. “Most programs are looking for strong vaulters, followed by bars, floor, and then beam.”

And, of course, don’t forget about the academics.

“Most gymnast have really good grades,” says Hicks. “About 80% of gymnasts hoping to compete in college have over a 4.0 GPA.”

While every NCAA program won’t require a 4.0 GPA, it is important that gymnasts recognize that strong grades are expected.

The importance of social media

At the moment, Instagram is the clear winner on the college recruiting social media scene.

“The trend has shifted away from personal webpages,” says Campbell. “Now coaches are definitely looking to see what gymnasts are posting on Instagram.”

So, what should gymnasts feature on social media? Hicks recommends gymnasts have a solid Instagram account that demonstrates the athlete building and developing their routines, that helps give insight into who they are as a person, and shows progression of skills.

“Coaches want to see clean gymnastics, but that doesn’t mean perfect,” advises Hicks. “A lot of times kids just want to post their very best skills, but coaches want to see your best effort. Post a good, clean skill or routine, even if it isn’t perfect. They want to see improvement, not just the final product.”

Hicks also recommends showing full routines, not just the best half of a routine.

“Show your flexibility, leaps, jumps,” she says. “Coaches want to see floor and beam artistry and they like to see routines start to finish.”

However, athletes need to be very careful about what they post on social media, because coaches can turn down an athlete based on comments they may make on other accounts, or inappropriate photos shared on other public accounts they may have. Even if the athlete is sharing to a private account they should keep in mind anything they post could end up getting out publicly.

“Any private social media should also be professional,” says Campbell. “I tell our recruits that if it’s not necessary, don’t put it out there. This is a certain window of time, and you have to be very careful about how you present yourself.”

Many gymnasts attend high performance camps held at colleges around the country—but do they really help? According to the recruiting consultants the key is targeting the camps offered at their top choice schools, or high-performance camps where many college coaches will be in attendance.

Hicks has seen some mixed results from camps.

“Camps are worth going to if schools the gymnast is targeting are going to be at the camp,” says Hicks, who adds, “Many times, the coaches already have a list and know who they want ahead of time, and other times a coach from a particular school isn’t able to make it to the event even if they were scheduled to be there.”

Other paths to consider

Keep in mind that earning a spot on an NCAA team isn’t the only way to continue competing in college.

“There is a place for every gymnast, whether it’s Division I, II, or III, Acro and Tumbling, or Club gymnastics,” says Gebeshian.

NCAA Acro and Tumbling programs are expanding rapidly, and many colleges offer Club teams available to gymnasts of any level.

“I encourage families to keep an open mind,” says Hicks. “Acro and Tumbling, Club gymnastics, or even diving might be the right path for your gymnast. There are so many possibilities.”

Check out this conversation... 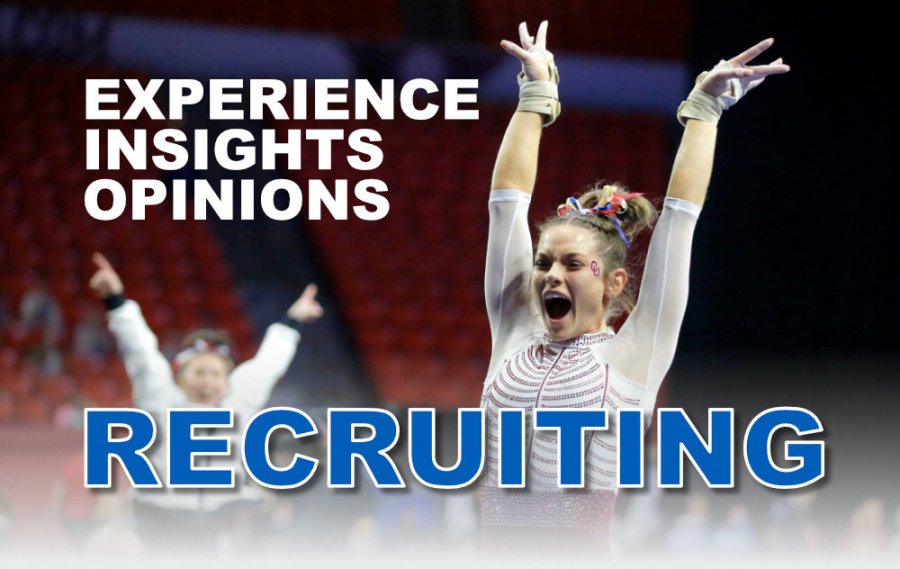 Since my DD is starting this process, and since the information exchange seems pretty asymmetric with all the information tilted toward the programs I thought I would start this thread to see if others would want to compare notes, observations, experiences, and opinions. My DD is a freshman in...

In a word: very. Currently there are 82 NCAA college gymnastics teams (divisions I-III), with a total of 732 scholarships available.

Can anyone explain these stats. 732 scholarships available????

Each year? I dont think this is right

My understanding is it more like approx 200 scholarships a year

Here is another article... Here’s everything you need to know about gymnastics scholarships—and how to get one.

Here is the recruiting spreadsheet from College Gym News as well...

In a word: very. Currently there are 82 NCAA college gymnastics teams (divisions I-III), with a total of 732 scholarships available.

Can anyone explain these stats. 732 scholarships available????

Each year? I dont think this is right

My understanding is it more like approx 200 scholarships a year

Its not really, it was worded confusing. The author took 61 DI programs each with 12 scholarships = 732. First that number is high because we know not all DI programs can fund 12 scholarships. Should have written something like, there are approximately 732 athletes on scholarship competing in DI gymnastics. Take 1/4 of that and on any given year there are less than 180 new scholarships available.

Its not really, it was worded confusing. The author took 61 DI programs each with 12 scholarships = 732. First that number is high because we know not all DI programs can fund 12 scholarships. Should have written something like, there are approximately 732 athletes on scholarship competing in DI gymnastics. Take 1/4 of that and on any given year there are less than 180 new scholarships available.

The article has been changed a bit... but everyone should feel free to keep commenting... that is the power of ChalkBucket.

And this does really bring up a good question... what is the exact number of scholarships out there right now? Anyone want to count that spreadsheet out?

And this does really bring up a good question... what is the exact number of scholarships out there right now? Anyone want to count that spreadsheet out?

I think that is impossible as the spreadsheet is notoriously inaccurate. Also, coaches have been known to hold scholarships if they know the next recruiting year is more impressive

How competitive is it? - approximately 10% of those who compete L3 will make it to L10. At that point, they have a roughly a 50% chance of competing in college - not necessarily on athletic scholarship.

Also, coaches have been known to hold scholarships if they know the next recruiting year is more impressive

Well sure… but that doesn’t make the amount less or more.

air force does not provide scholarship?

air force does not provide scholarship?

They are not “free” they require a service commitment. And as officers, it’s pretty much for life as they can be recalled at any time.

They are not “free” they require a service commitment. And as officers, it’s pretty much for life as they can be recalled at any time.

lol that's why I put the word in quotes. I felt fairly certain that all would understand what that meant. - In the same sense that scholarship student-athletes receive "free" tuition but they also require commitment to the team/school.

Too many hours/switch sports