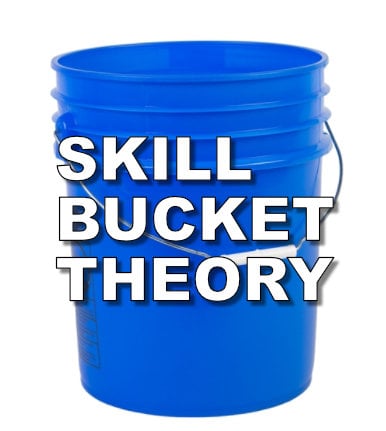 First off… I wanted to say how awesome Simone Biles is and how great is was that she had the courage to do what she did.

I just want to throw this out there and see what everyone thinks of this theory. We use this theory aggressively with our team.

The former head coach at our gym one day told me that every gymnast has a “skill bucket”. He said the bucket can only hold so many skills for each gymnast. For each and every gymnast the bucket is a different size.

He said… “Once your bucket is full… it can hold no more. You must take something out or things will start randomly spilling out of the bucket.”

I didn’t believe him as a younger coach… but over the years I have learned to use the bucket approach. The 2 things that I have added to his bucket philosophy with my approach to coaching the athletes is the following…

1. The bucket can and will change sizes
2. There is one thing that will drastically shrink an athlete’s bucket… STRESS

So what about it… is this something that others use? Has anyone ever heard this?

I’m not at all sure what happen to Simone…

Did the same entry on vault with 2 completely different post flights end up confusing even the greatest of all time? Did Simone get lost because she felt slightly off in the air because the block was making the flipping rotation feel more like the Yurchenko Double Pike than the Amanar. Did she feel as if she was going to over rotate forwards if she continued to pull the twist?

Anyways… what does everyone think about the “skill bucket” theory?

JBS is a Head Coach. He has a wife, 2 daughters, and a son. All of them are involved in gymnastics. He enjoys family, friends, spending time on the lakes in the ski boat, the Chicago Bears, NASCAR, chicken wings & beer, and good music!

Biles is out… Carey is in

How many skills is too many for one athlete?​

I think that's a very interesting theory. I can certainly imagine how easy it would be for muscle memory to get confused on 2 different valuts with the same entry - one with more flipping and the other with more twishting. Interesting.

From what I have read here and there Aly Raisman was talking about how difficult the prep for Vault was at the Olympics especially if you are working on two different entries etc for vault finals. Between the practices and competing and travel and stress you almost dont know whats going on by the end of it. If most competitors are working on two and find that stressful and difficult imagine working on essentially 3 different vaults and all those balls of what will I do being up in the air.

I think she put too many new skills in too short of a time frame into her skill bucket.

If most competitors are working on two and find that stressful and difficult imagine working on essentially 3 different vaults and all those balls of what will I do being up in the air.

It's funny... personally... I don't consider working on 2 or 3 vaults very stressful. What I do find stressful (in my mind right now) is working on 2 vaults with the same entry and completely different post flights. Even more so... the two exact vaults that she is working seem like they could potentially cause problems with each other.

I think there is a skill bucket, and it’s prob different for different kids but when mine hyper focuses on getting a skill - something else gets booted out. When there’s no stress and it’s just training, she can keep filling that bucket. But the second someone says “you’re going to do this skill” (when it’s not perfect, on an event she’s not comfortable with) - it goes out the dang window.

From the coaches perspective, it’s a vote of confidence - she’s telling her she believes she can do this, others have been given easier dismounts so it’s not a matter of being a stickler for “we only do this”. But for my kid… you’ve now put expectations on her that she feels like she’s failing to meet.

Nothing makes a bucket shrink quite like stress and expectation. My kid had a season where she won every meet at bars (she’s generally won every meet at every level when she hasn’t fallen) - on the way to states, her favorite coach, who has known has since she was a toddler, gave her a hug and told her to go win bars and she’s going to be watching her.

I saw the look on her face the second she said she was going to be watching her. My god, that meet was a train wreck, bars was a train wreck. People don’t realize the kind of stress they put on elementary school kids, let alone the world on Simone

So people’s opinion on the skill bucket theory? Would the same thing apply in all areas or life? Education for example, overworked people etc.

Experiences with Bridgeway Academy or similar?